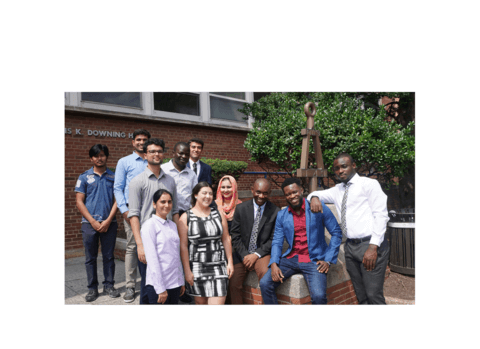 Ironically, both graduates started their paths as aspiring medical doctors. Dr. Doku was even affectionately called “Dr. Ronald” by his father from early childhood. Both graduates applied for pre-med programs and were accepted. Dr. Adebayo came across information for a computer science program during his application process and decided that would be his path. His family was quite surprised at the switch but still provided their full support. Dr. Doku had completed a year of pre-med studies before he switched his major to computer science. The initial exposure to computer science courses captured their interest, leading to unrelenting success.

Dr. Adebayo joined Howard University in 2017 as a Ph.D. student and worked as a graduate research assistant on federally funded projects under the supervision of Dr. Rawat. Dr. Adebayo’s research areas are in cloud computing, cybersecurity and wireless virtualization. His Ph.D. dissertation titled “Secure Dynamic Spectrum Access Using Aggregated-Query-as-a-Service in Cloud-Assisted Database Enabled Cognitive Networks and Wireless Virtualization" focused on cloud computing enabled secure wireless networking. During his doctoral studies, he published several high impact research articles. He became fascinated with cybersecurity after an introduction to the subdiscipline by Peter Oju, his mentor at University Press, PLC, where he interned in 2011. For an independent research project in his master’s program at the University of Ibadan, Dr. Adebayo worked on mobility-aware access control and has not looked back since he says.

With hard work and dedication comes a prize. “Nothing beats getting that degree with a dream job already secured,” comments Dr. Adebayo.

Dr. Doku was a Bison from the start. He joined Howard University in 2008 and now has a B.S., M.S. and Ph.D. in computer science. “If you do the utmost best you can do today, and you keep repeating it each day, the future will automatically sort itself out and everything will fall into place in the end. It might seem hard or everything might not seem like it’s working in the beginning but keep persevering and everything will fall into place,” he says.

And their fondest memories at HU?

Both graduates remark on the incredible sense of community at Howard University and the unrelenting support they received from professors and mentors. Dr. Rawat made himself available to his students at all hours and was always ready to listen to their ideas.

“Working with Dr. Rawat was intellectually challenging and fun at the same time. He knew exactly what made everyone tick and was always willing to give feedback on my work regardless of the hour of the day. He helped lay out a plan when I started my program and I’m glad we were able to implement it. He always showed me he believed in me which further inspired my confidence,” added Dr. Adebayo.

As a native of Ghana, Dr. Doku vividly remembers the first time he saw snow. “It was 9:00 am on a cold Thursday morning, and I was walking to my next class. I remember the snowflakes falling from the sky, and I had the biggest grin on my face. People were probably wondering what was wrong with me.”

We wish all of our recent graduates the best of luck in their current and future endeavors!