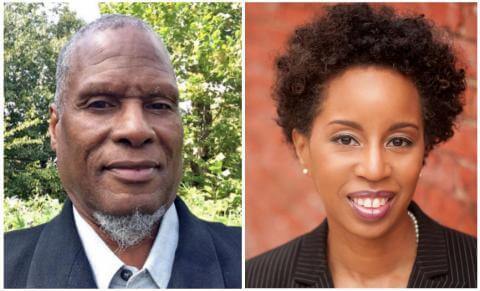 We are pleased to announce that two graduates of the Howard University Department of Architecture, Kwendeche (B.Arch. 1976) and Kathy Dixon (B.Arch. 1991), have been elevated to the College of Fellows of the American Institute of Architects (FAIA).

This is an unparalleled honor and the highest individual recognition bestowed by the Institute. The selection process is rigorous. Approximately three percent of the more than 90,000 AIA members have this distinction. The recipients of the FAIA are recognized for their outstanding contributions to the profession either through design, architectural education or the advancement of the profession after 10 years of AIA membership. The 2017 FAIA class consists of 178 people.

The 2017 Fellows will be honored at an investiture ceremony during the AIA Conference on Architecture in Orlando, Florida (April 27 – 29, 2017). They were honored at their alma mater on April 12, 2017.

Congratulations to Kwendeche, FAIA and Kathy Dixon, FAIA for this significant accomplishment.