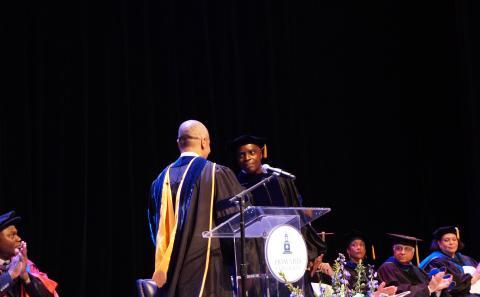 On Monday, April 14, 2019, Achille Messac, Ph.D., current dean of the College of Engineering and Architecture (CEA) officially announced his resignation to college faculty and staff, giving way to another dean to plan and lead the next phase of advancement for the College of Engineering and Architecture. Dean Achille Messac shared his excitement “about the historic progress of the college over the past three and a half years.” He will continue to serve as dean through the end of the semester, after which he will take sabbatical leave for a year. We welcome Interim Dean John M. M. Anderson.

Dean Messac expressed his pride in the college and the historic progress that has been collectively accomplished since his appointment in the spring of 2016. The college’s accomplishments during this period were successively building upon the strong historical foundation of Howard University. The university administration, faculty, staff, and college leadership joined forces to embark on a journey of transformation with a clear and distinct objective in mind: student success!

“First and foremost, the credit for these accomplishments goes to the faculty, supported by the staff. And ultimately, our students made it all happen by defining for us what success truly means,” shared Dean Messac in his message to faculty and staff.

Indeed, the accomplishments have been plenty, so where did it all start?

As for our entire body of esteemed faculty, an innovative series of faculty support initiatives were implemented. These initiatives resulted in research expenditure growth, a four-fold increase in Ph.D. graduation rate, a 38% Ph.D. enrollment growth, an increased graduation rate, and an exceptional rise in faculty national awards and publications.

In the summer of 2017, the educational and career development partnership between Howard University and Google, Inc., Howard West, a vision of President Frederick's, was realized with a successful pilot program. The partnership has now expanded to include other HBCUs and is recognized as Tech Exchange, a full-time program offered to computer science majors in their junior year.

On the academic side, the Master of Architecture program was launched in the fall of 2018, along with the initiation of the possible creation of a unique dual Ph.D. program partnered with the College of Engineering of Carnegie Mellon University. The 2018-2019 academic year accomplishments also comprised high accreditation performance with the successful expected renewal of all engineering and architecture programs. Our renewal of the architecture program greatly elevated its national standing, accompanied by a five-fold increase in first-year enrollment.

In the Office of Student Services, there were several successful transformations as well, such as the new undergraduate advising model and the soft skills initiative.

Lastly, numerous physical infrastructure improvements have included the completion of our Innovation Space, many laboratory upgrades, and office and student lounge construction and renovations.

“As we all know, Howard University holds a special place in the national consciousness. Our college has the potential to hold an important seat at the national table of socio-technological discourse. As the setting has brought me to this decision-point, the fervor of my optimism for our college’s future has not waned in the least. You have had my complete devotion over the past three and a half years. From near or from afar, I will continue to have you and our students at the forefront of my thoughts. Indeed, we have many a challenge yet to conquer; however, as a community we are a truly special people,” Dean Messac comments to faculty and staff.

Dean Messac looks forward to supporting the new generation of leadership as it embarks on the next phase of college transformation!

College of Engineering and Architecture