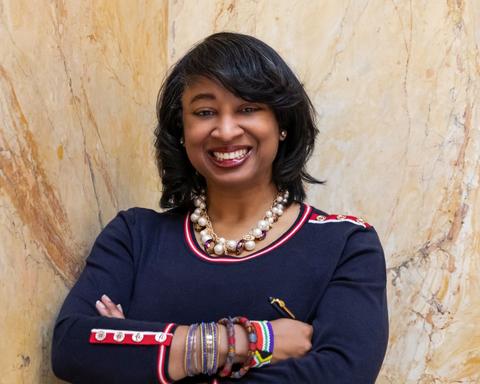 Alumna Renetta Garrison Tull, Ph.D. (BSEE ‘91) recently received the Electrical and Computer Engineering Department Head Association’s (ECEDHA) Diversity Award. According to the ECEDHA website, this award is given to department(s) or individual(s) in recognition of proactive efforts to increase cultural, ethnic, and gender diversity within the ECE student body and among ECE faculty, that go well above and beyond the normal institutional recruiting practices. ECEDHA membership comprises over 250 ECE department heads or chairs from across the US and Canada.

Dr. Tull currently serves as vice chancellor of diversity, equity and inclusion at University of California, Davis (UC Davis). In her role as vice chancellor, she has developed and expanded programs such as those within the PROMISE Engineering Institute, a Promotion of Networking for Diverse Future Faculty.

At her recent speaking engagement for the United Nations Commission on the Status of Women on Women in STEM and Climate Change, Dr. Tull was pleased to recognize women’s contributions in climate change, advocacy and research, given her work towards gender equality and in humanitarian engineering. This was one of several speaking invitations from the United Nations Educational, Scientific and Cultural Organization, known as UNESCO, which is a specialized agency of the United Nations aimed at promoting world peace and security through international cooperation in education, arts, sciences, and culture.

Now specializing in humanitarian engineering, Dr. Tull graduated with her bachelor's degree in electrical engineering from Howard University (HU) in 1991. When she and many of her friends were applying to ivy league schools, Dr. Tull had also applied to HU. She was accepted at many schools but chose Howard. It was refreshing for her to be accepted into a campus community for who she was without having to prove herself.

Engineering careers in her family all began with her father’s unparalleled love for math. Born in Philadelphia, PA to Howard alumni and raised in Plainfield, NJ, she is the daughter of a Howard love story. Dr. Tull’s parents met at HU in the 1960’s. Her mother was an English major and her father was an electrical engineering major. He always talked about math, she recalls, and that engineering was the best career path for her and her brothers. They needed to be good at math, he would tell them, because math is an objective measure and a surefire way to circumvent a lot of discrimination. It would be difficult for people to tell them they were wrong.

The family kitchen table was where she learned math, including algebra and calculus. When she was in the elementary school, her parents gave her algebra coloring books. “I clearly remember learning the Fibonacci sequence in the fifth grade,” she shares. Enrolled in Project SEED, an after-school advanced mathematics program for elementary and middle school students, her parents ensured that she had a strong foundation in math.

Learning algebra and calculus from her father was very helpful because he was insistent on her showing her work. Even if the answer was known, he ensured his children showed all the steps because he wanted them to be sequential with it. This taught them at an early age to be very detail-oriented. “Dad believed that if we could show all our steps to solving a problem, then we could never be accused of guessing or copying or cheating,” she says. “He was trying to bulletproof us on a variety of different levels.” As a result, she had become so good at math that engineering only felt natural.

As for her early interest in engineering, she was very interested in combining medicine with engineering. However, she never sought out engineering the way she sought out literature. In elementary and middle school, Dr. Tull would write science fiction stories about life underwater. Her stories, she says, would now fall into many current themes surrounding environmental advocacy. These stories along with being an avid Star Trek fan fueled her interest in research.

Engineering was a means to another career for Dr. Tull. She knew electrical engineering would help her develop ideas she had in the realm of telecommunications, such as her later work on a speech technology project. Freshman and sophomore years in the electrical engineering program at HU were a struggle for her. Being a kinesthetic learner, it wasn’t until junior year when she transitioned to applying learned materials and conducting research that she began to do well.

Her fondest memories at HU as an undergraduate are of the closeness she experienced with her classmates. The strong sense of community was what brought her to HU and what continues to bring her back to support her alma mater. “As students, we were very cohort-driven,” she says. “We would all attend events like Homecoming together and then come back together to study.”

After HU, Dr. Tull pursued graduate studies at Northwestern University. Getting her Ph.D. was the goal, so she combined her electrical engineering education with something closer to her childhood passion - a Ph.D. in speech science with a focus on engineering and communication disorders.

With her Ph.D. in speech science and background in electrical engineering, Dr. Tull has served in various faculty positions and leadership roles in academia and the private sector. She summarizes her areas of interest and research in global STEM diversity and inclusion, inclusive excellence in education, transformative education policy, high impact practices for student success, faculty diversity, psychological sense of community in action and facilitating communities of practice, attention to global grand challenges and the United Nations’ Sustainable Development Goals.

An international speaker on global diversity in STEM, Dr. Tull has led discussions around the world on topics such as “Inclusive Engagement – Engineering for All,” “Cultivating Inclusive Excellence within Science, Engineering, and Technology,” work/life balance, family, and prevention of domestic and work-place abuse. Her recognitions include the O’Reilly Media “Women in Data” cover, Global Engineering Deans Council/Airbus Diversity Award Finalist, and ABET Claire L. Felbinger Award for Diversity.

Also at the international level, Dr. Tull has been involved with projects for Puerto Rico’s ADVANCE Hispanic Women in STEM, the Latin and Caribbean Consortium of Engineering Institutions, the National Academies of Science, Engineering, and Medicine, UNESCO and the Student Platform for Engineering Education Development Global Mentoring Award.

Dr. Tull has published more than fifty research works and is a Tau Beta Pi Eminent Engineer. She is a passionate advocate, global mentor, education policy strategist and champion for equity and has served on consensus committees for mentoring and women in COVID -19 for the National Academics of Science, Engineering and Medicine. She attributes her current success to being observant in the workplace, recognizing problems, and offering solutions. As one example, at UC Davis, she recommended the position of vice chancellor of diversity, equity and inclusion, and then applied for the position.

So, what keeps her motivated?

“Knowing that the work I’m doing is going to help generations of students [keeps me motivated]. One day, somebody I mentor is going to win the Nobel Prize. I consider it my duty to be the best mentor for my students,” said Dr. Tull.

“Don’t give up. Engineering gets hard. If there’s going to be a pivot, try to pivot as close as possible to the original goal. Press forward. If you can get your Ph.D., I would highly recommend getting your Ph.D., whether it’s in an engineering discipline or a supplementary, connected research area. That research mindset is going to be fantastic. It’s going to be great training. A research mindset can also translate into a growth mindset, which can help with entrepreneurship, applied research, and a lot of different areas.”