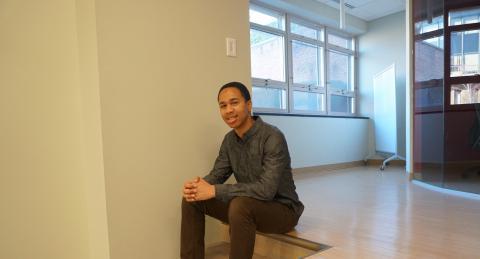 Chemical Engineering Sophomore Jordan Smith is passionate about climate change research and finding renewable energy solutions. Born and raised in Cincinnati, Ohio, Smith made the move to Washington, D.C. after he was selected as a Howard University Bison STEM Scholar. Smith was excited about attending Howard University, as he loves surrounding himself with like-minded people: young, bright engineers of color.

Deciding to study engineering was easy for him, Smith comments. From his elementary school days, Smith always found that he was better at math and science than other subjects. Math and science just came naturally to him. He also comes from a family of engineers. Smith’s father is a mechanical engineer and his grandfather is a civil engineer.

Selecting Howard University to study engineering was an even easier decision for Smith. Smith’s mother is a Howard University alumna. His mother “had a great experience at Howard University,” says Smith. He says that he generally seems to find that the direction of his path in life is “pretty clear and straightforward”.

Smith doesn’t just love math and science and all things engineering, though. Yes, engineering majors play sports, too. “If we’re going to eat, we’ve got to work it off,” he adds, as he notes the importance of physical activity. Throughout high school, he played basketball and soccer. He continues to play soccer at Howard University as an intramural sport.

Smith’s motivation is “to be a winner”. If his generation can’t be better than the previous generation, he feels it would be “underachieving.”

“Feel like a winner to be a winner. To be better every day.”